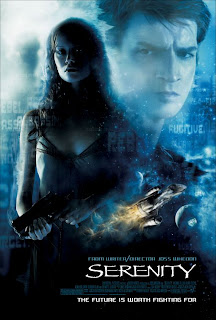 It would be completely unfair to not give you some context about this review. As with pretty much any movie whose creation exists beyond itself, the experience of watching such a movie is grossly affected by one's connection to the pre-existing source material. In my case, my fore-Serenity exposure to Joss Whedon's 'verse includes three crucial steps.

1) A pre-existing fandom, nay, religious devotion to nearly all things Joss Whedon.
2) Twice watching (and loving, with increased devotion and attention to detail) of the Firefly TV series, many years after its initial broadcast and cancellation.
3) Reading the book Finding Serenity: Anti-heroes, Lost Shepherds and Space Hookers in Joss Whedon's Firefly, a collection of essays which deals with all manner of theories, speculations, and opinions about the show itself. The only reason there isn't a review up for it is because I had to return it to the library before finishing writing it.

So, with all this fascination and expectation I sat down to Serenity. So, it is with these experiences that this review is written. I can't unwatch the show, I can't unread that book, and any attempts to speculate as to what a virginal experience of Mal n' pals adventures would feel like would be (cheapshot) as fruitless as a third season of Dollhouse.

At first, Serenity is a bit jarring, and not entirely easy to get into. Rather than getting Mal (Nathan Fillion) right away, we get (what we soon learn to be a flashback of) Simon (Sean Maher) rescuing his sister River (Summer Glau) from a secret government lab. This opening makes it clear that the is devoted to wrapping up the unresolved underlying narrative of the first and only season of the show. The opening scene also showcases another theme of the movie: going to town with special effects. With the opener, and much of the first act, it feels like Whedon is taking full advantage of the big-movie budget, and is throwing in special effects in order to announce that Serenity has hit the big time. Sometimes it works, but sometimes (like during the floaty-car chase), the result looks kind of hokey.

Past this opener, we are introduced to an introduction of Serenity (the ship)'s crew. Immediately, everyone is presented as an amped up version of themselves. Without the benefit of a dozen or episodes to introduce the characters, the filmmakers have the unfortunate task of cramming the essentials of each into a five minute exposition. With this limitation, some of our folk seem more one-sided than we left them. Couple that with the time that has passed since the last episode "Objects In Space," and the unseen development of the characters, there's an unshakeable feeling that we're a far cry from Firefly. Mal is angrier, him and Simon are butting heads, and even Wash (Alan Tudyk) is more brilliant pilot than wise-cracking everyman. Whether it's out of narrative necessity or a really well-planned intentional disassociation on Whedon's part, Serenity begins differently enough to make everyone feel like we're starting from scratch.

Also new to the 'verse is an unnamed government headhunter/assassin/all-around BAMF (Chiwetel Ejiofor) whose presence and very threatening violence helps escalate Serenity's situation. At first, Mal's primary concern is getting a good-paying job. Then, once more of River's history and abilities are revealed, he finds himself as the driving force behind an ideological war that he had been semi-consciously fighting all along. The longer the movie runs, the higher the stakes get, with very real, touching casualties along the way. To this end, I have to absolutely recommend that one does not read spoilers before seeing this movie. Much of its potency was lost because I was unable to be caught unawares by some of what I saw.

In this world, the question is not what you believe, but rather whether you believe in it enough to die for it. It is part of what makes Ejiofor's character so dangerous. He goes so far as to state that the "better world" that he is trying to shape is one where he does not exist, as his violent, brutal ways should have no place in it. Mal's internal journey deals with his development into such a creature. Before, he had been fighting out of vague, but firmly engrained senses of loyalty, duty, chivalry, and nostalgia. Now, he has found a cause to fight and die for. Seeing him triumphantly realizing that he has reached that level of devotion is an inspiring (and beautifully depicted) moment, that is only slightly undermined by the blatantness of its statment (Operative: "Are you ready to die for it?", Mal: "Yes."). This is also not the first occurence of the themes of the movie being spoken outright by characters. Nearly everything that Shepherd Book (Ron Glass) says takes on some kind of literal form later on.

Speaking of beautiful moments (which I did about three sentences ago), it is the final twenty-five or so minutes that really make this a great movie. By this point, Serenity has finished paying tribute to its source material, transcends it, and becomes an ethically-charged, balls to the walls free for all. Absolutely no one is safe from physical or ideological threat, even the bad guys. The film's most memorable sequence is one near the end where River shows off her psychic-assisted ass-kicking in a beautiful, fluid, stunt doubleless fight. There is absolutely no question that no power in the 'verse can stop her.

Serenity accomplishes everything it sets out to do. It wraps up many of the loose threads of the series while still creating a wholly enjoyable film. Even though much of the whimsy of the show is missing, it seems to have been appropriately sacrificed at the twin altars of gravitas and character development. More unfortunately, many of the characters are necessarily relegated to supporting, almost cameo roles, still leaving some fan desire left unsatiated. As successful as it is, Serenity still leaves me wanting more.